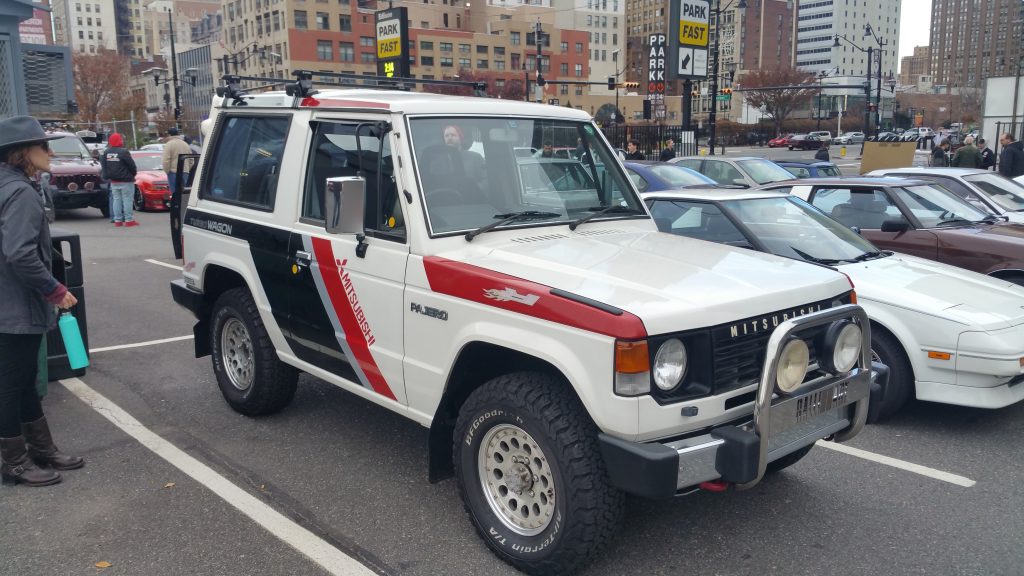 The world of off-road racing is filled with categories and variants within those categories.  Every race is a monumental team effort that requires skilled driving techniques that are simultaneously focused on preserving the car to make it to the end of the race yet at the same time on driving to the absolute limit possible.

This is why any car that demonstrates itself capable in the off-road world is almost certain to be a success in the on-road world of daily driving, soccer practice hauls and supermarket parking lot obstacle courses.  This is the case with the Mitsubishi Evo Lancer, the Subaru Impreza, and the Porsche Cayenne to name several that are available on the US market.

This article, however, is about a car that made it to the US only in a variant form, but dominated the Paris Dakar Rally on its third try and went on to dominate other off-road races.  For those of you that noticed, yes this particular car, the one named in the title and shown in the picture above started racing off-road back when the race was called Paris Dakar Rally.  It was only in 2008 that the race was renamed to just Dakar Rally.

So back in 1985, the Mitsubishi Pajero was revving through desert sands as it made its way to first place in the Paris Dakar Rally.  That was its third attempt at the race and already it climbed the podium to first place.  Was this an accident, luck, perhaps coincidence?  Not likely, the Pajero continued to dominate, winning the Australian Safari and the Northern Forest races.  This little jeep was doing a lot of things right.  Up until recently, I had only read about the Pajero, but a while back I got lucky and saw one at the Jalopnik Hurricane Relief show.  It was definitely a car that I wish I had more time with.

This particular example was an import from Japan by Inbound Motorsports.  It was amazing.  Aside from being right-hand drive and aesthetically in great condition, everything about its design showed thought and planning.

For starters, the vehicle does not have the oversized or lifted look.  It has the rally car look, which in my opinion is preferred. Stepping inside, there is a comfortable, driver-centric interior. 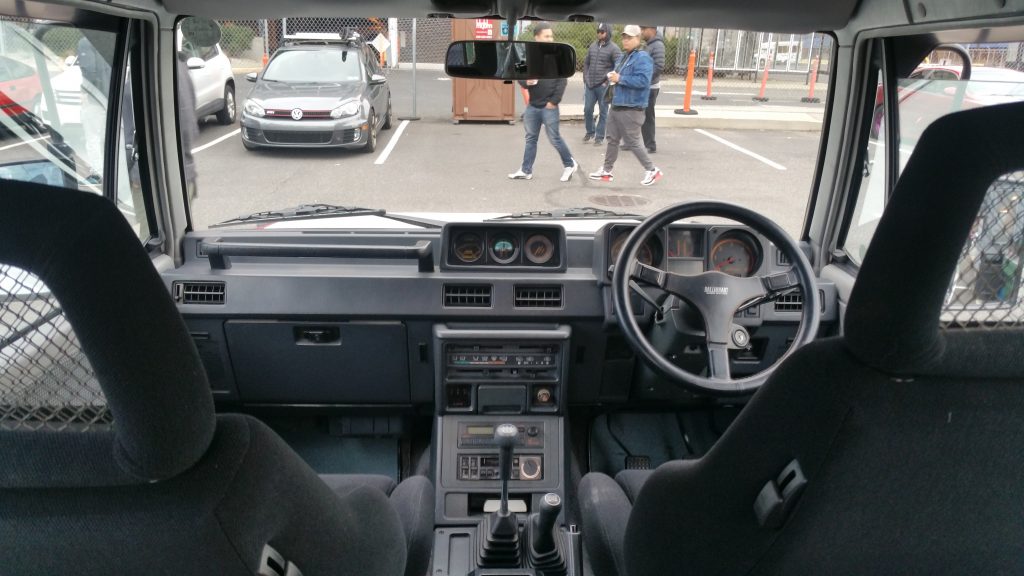 The middle console features navigation gauges.  There is an altimeter, a level indicator, and a compass.   These gauges are extremely useful to a navigator during a multi-stage off-road race but in the vehicle, they are also available in the production version for everyone to use, I don’t know of any other car that features anything like this.  Sure there are “race inspired” cockpits, but these are actual gauges that come with the car that you can use on your own off-road adventure without having to install them yourself.  They are also useful if you choose to park up or down a steep hill, you will know exactly how steep that hill is, useful information indeed if you decide to turn the front wheels towards or away from the curb when parked on a hill.

The Pajero pictured is the first generation Pajero.  When it was launched in 1982, it was only available as a 3 door vehicle (the back door being the third door).  The following year, 1983 Mitsubishi released a 5 door, longer wheelbase model, and the Pajero is currently in its 4th generation.

When the Pajero launched, it already had features that were unusual for 4 wheel drive vehicles at the time.  There was an option for a turbocharged diesel engine and a double wishbone suspension with torsion bar springs.  This allows for height adjustments without swapping out parts.   This type of suspension, in my opinion deserves to be discussed and showcased, so look for a post on that in the near future.

In the US, the only variant of this vehicle was the Montero, which Mitsubishi stopped selling in 2006.  The interesting part is that Mitsubishi actually marketed the second generation Pajero as the Montero.  However, the Pajero is still being produced to this day, but not available on the U.S. market.

Mitsubishi has had difficulties with the U.S. market and has cut back a lot of models.  However, rumors as old as 2016 have recently started to resurface again, that a Montero or Pajero might be coming to the U.S. market.  Perhaps even to compete with the Bronco.  It would be great to have an off-road capable SUV with rally heritage for sale in the U.S., but regardless of whether or not a new Pajero/Montero variant makes it to the U.S., I do believe that the first generation Pajero, is a collectible car that will rise in value over the years.  If you can get your hands on one that competed in an actual rally, it would be a tremendous find.  It would be a great car to own, even if you just like jeeps and off-roading, as it undoubtedly has a historic heritage that will always attract interest.  This is certainly a car that RevLane.com would love to  showcase.